Today marks a very special occasion in a young woman’s life. I am that young woman. One month till the penultimate season of Mad Men begins and I couldn’t be happier! I am happy because:
A) Mad Men is just my goddamn fucking life.
B) Matthew Weiner finally realized that all great things must come to an end.
Except he realized it too late, so now it’s more like all pretty good things must come to an end.

I’m not saying Season 5 didn’t have its moments (can I get a holla for that weepy Peggy/Don farewell?) but after the absolute zenith of creative achievement that was Season 4, it would have been nice to make 5 a bit of an elegant cooldown session. As the years advance in Sterling-Cooper-Draper-Prycedom, our heroes and heroines get older and sadder and it’s not giving me the feels so much anymore. Now we’re pretty much just watching Pete Campbell cringe away from the encroaching hellfire that is the boogie-oogie 1970s: 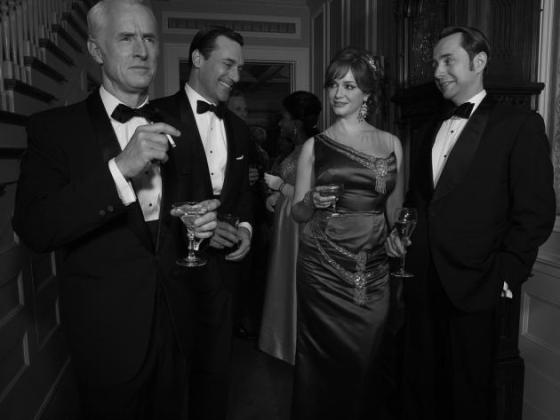 Only my groovy ‘burns can save me now.

That said, it is always my sincere hope that Weiner will captivate and surprise me. He did that last season, but in the meanest way possible – by killing off my darling Laney-pants. No more suicides please. However, I will take a murder. Wouldn’t put that past Don or Un-Fat-Betty.

Of course, The Master took the time to disseminate 10 “facts” about Season 6, but as usual they don’t really portend much. I don’t mind; I hate when showrunners spoil shit hither and thither. And Man Men isn’t really the kind of show you can spoil anyway (see Weiner’s revelation that every season has “different tones and flavors,” like a Pinkberry of class and gender struggle). I like my quality programs slow, and thorough, and thoughtful. Like the lovemaking of a great samurai. Take notes, Weiner!

Anyway, so, so excited for the premiere, which is going to be two delicious hours. Let me note that I am pulling for an upwardly mobile Peggy storyline and some good Sally Draper bitchery. If you wish to puzzle things out a little bit and prepare for the TV event of the spring, check out the preview. See you in a month, fellas.

One thought on “Mad Men: Season 6 is Nigh”