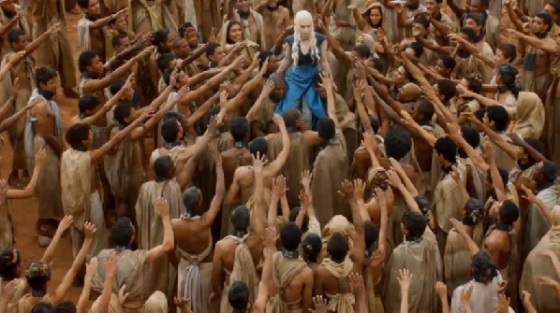 Last night’s Season 3 finale was the best-written episode in the show’s history.

I get a little glassy-eyed just thinking about it. The end of every season typically brings with it some nice cliffhangers and a clean setup for next season. This finale set the stage for a future. The episode had the feel of…well…history in the making. We’re watching the roiling beginnings of a new dawn for the GoT world.

Basically, “Mhysa” birthed a massive political power struggle, began to slot exactly the right characters together like puzzle pieces, and ushered in A NEW THEME. A new fucking theme: an encroaching supernatural wave of death, White Walker-style. This was all accomplished with such writerly aplomb and performerly brilliance that I might as well drop dead now because I can’t handle life’s goddamn beauty.

Over in some cold dungeon, our favorite former Stark ward is CUT OFF from the rest of the world. See what I did there? No penis. Lopped off like prunin’ bushes. We finally learn the true identity of his sadistic torturer – Lord Bolton’s bastard, sent by Lord Walder Frey (and by extension, Tywin Lannister) to break Theon and essentially neutralize the Greyjoy threat. Very disturbing scene in which we get to watch Bastard Bolton break Theon’s spirit and christen him with his new slave name: Reek. Meanwhile, Theon’s sister Yara suddenly has a change of heart and decides to defy Lord Greyjoy’s wishes in order to rescue her brother from Mr. Crazy Dickless. Nice to see siblings getting along. Speaking of…

Was SOOO looking forward to Jamie and Cersei’s emotional reunion. It was brief but very poignant. Nice to see Jamie’s BFF Brienne give him an encouraging smile before he walked the plank into King’s Landing – he definitely needed that support, because Cersei reacted less than favorably to his disfigured limb. Side note, Nikolaj Coster-Waldau does some of the BEST male cryface in this show. Give him a HAND! AYO!!!

Extremely adorable happenstance meeting between Bran Stark, his small motley crew, and the ever-cherubic Samwell Tarly who has finally escaped the White Walking Jack Frosty army north of the Wall. The look on Sam’s face when he tells Bran he cherishes his noble, amazing, and hot best friend Jon Snow is kyoooot. I also thought this scene was notable for Bran’s quiet poise; I don’t know if this was the child actor or just wishful thinking, but he seems to have inherited a lot of his mother’s diplomacy and kind, firm pragmatism. Definitely mad danger afoot if he ventures into the North, but we’ll see where the Sight takes him.

Shot Through the Heart: Jon Snow and Ygritte

Who else felt a little fanfiction flutter in their hearts when Ygritte peppered Jon with her love-arrows? That scene was a little schmaltzy but Rose Leslie is a VERY affecting actress. She plays hard-slash-tender like no other bitch. She’s probably just pissed because Jon Snow won’t be licking her neck, her back, etc. etc. for awhile.

This was HANDS (of the King) DOWN my favorite scene of this episode. Joffrey calls a Small Council meeting to gleefully announce that Robb and Catelyn Stark are dead. And that he plans to throw Sansa a bone at his wedding ceremony. Actually a few bones. Her brother Robb’s head-bones.The tone shifts all at once when Tyrion, ever the sexy-furious voice of reason, levies accusations of poor leadership against his nasty whey-faced nephew. He all but threatens to poison him! So REAL. Also really enjoyed the subsequent conversation between him and his father Tywin, who ultimately admits that he planned to drown Tyrion as a baby were it not for his Lannister-ness. Said it before and I’ll say it again: Peter Dinklage is unrivaled. All the acting. All the yes. His subtle anger, his pain, his gears constantly whirring – it’s no wonder he’s got a friend in Varys, who correctly assesses him as “the only good thing for this Kingdom.”

God, I’m so over the Red Woman. She clearly has NO IDEA what is going on. First Stannis is all ready to kill Ser Davos for defying the stupid Lord of Light shit and the Red Woman is like “Yeah, kill him! And I’ll rub my nubile body on you later for sure. The night is dark and full of terrors, THAT’S WHAT SHE SAID.” And then Davos is all, “Well, I can read now and I went through your mail and THE WHITE WALKERS ARE COMING.” And then Red Lady considers for a second and is like, “I guess we should put that whole King thing on hold then.” Make up your mind. Stop taking people’s virginities. Buy a new robe. Not red.

So over in Yunkhai, Daenarys has freed all the slaves and is doing her usual “Choose your own adventure, but probably come with me because I have dragons” thing. Seen it all before and I never held it against her, because Dany is clearly a bit of a tactical savant. She’s been a terror since the public school era and has been doing Drogo proud by conquering EVERY city in her midst on the road to Westeros. I generally prefer Dany as a dangerous motha-of-dragons, which is why this scene struck me as a little heavy-handed. The thousands of slaves, inspired by her beauty and fearlessness, begin to chant “Mhysa (Mother)!” and surround her in a spiral of cult-of-personality. She even basically stage dives into the crowd. Stirring enough, but something about it struck me as on-the-nose. We get it. She’s the prom queen. However, the final shot from above, showing her bright conquering face in a sea of worshipful bodies, makes it clear just how HUGE a Throne-contender she’ll be in seasons to come.

I want to end this recap with the most interesting scene of the episode: Arya’s little vengeful freakout in the woods. She overhears a few d-bags talking about Robb’s disgusting and violent death, and goes all stabby on their asses with some help from the Hound. I love psycho badass Arya and her frightening, character-building journey. But most of all, I loved the throwback to the Faceless Man. Arya learned from swordmaster Syrio to stare the God of Death in the face (“Not today!”) but she learned from the Faceless Man to harness Death and make it your bitch. Her little face leans close to the silver coin he gave her, and she whispers “Valar Morghulis.” Just like that, you know: Arya is going to become the littlest and scariest assassin in the business. A great development for the best young character.

So that’s it! No more Season 3! I’m baskin’ in the afterglow. WINTER IS HERE!