“Horror” – what a shapeshifter of a word. We use “horror” to describe a film genre that we associate with Freudian fear and fantasy, buckets of blood, an exaggerated picture of the dark; and yet we can also call race-based state violence a “horror,” or watch a TV special about the “horrors” of Black Americans forced to live in rat-infested ghettos. This week I found myself really interested in the multi-faceted uses and interpretations of horror – how do we reconcile the human anxieties we represent with fictionalized atrocities, vs. the real atrocities of human life that manifest in deep fissures of anxiety in society?

END_OF_DOCUMENT_TOKEN_TO_BE_REPLACED

The specter of lesbianism stalks the periphery of These Three (1936) at every turn. Even though this adaptation of the overtly lesbian dramatic novel The Children’s Hour was actually adapted for the screen by the original writer Lillian Hellman, the resulting film stands more as a compelling example of the ham-handed Hays Code than a completely viable text. The character Joe becomes an embodiment of suppression, a substitute for female/female sexuality, a corporeal form behind with the true theme of lesbian love and struggle hides in plain sight. Watching this film is such a strange experience, especially for one familiar with the source material. I could liken it to eating a cake that was made with a cup of salt instead of a cup of sugar, and telling yourself with every bite that the saltiness is SUPPOSED to represent sweetness. As “unnamed and invisible” as lesbian romance and sexuality is in the Code, it finds a weird kind of vitality when male sexual mores attempt to define it, refine it, or erase it. Foucault also touches on this sort of self-defeating mechanism of sexual repression as an act of tamping down “useless energies and the intensity of pleasure.”

END_OF_DOCUMENT_TOKEN_TO_BE_REPLACED

Is film noir just an artifact, a cinema movement with a beginning and an end? Many modern filmmakers (and showrunners) play with the stylistic conventions of noir as a kind of postmodern exercise – sometimes for the pleasure of pastiche (looking at you, Woody Allen), or maybe to fetishize history (Mad Men occasionally flirts with noir-ness). Personally, I feel a kind of detachment from noir; I read noir works like dated fables about American society. Noir is weird because it’s deeply entwined with a certain era of American filmmaking only a couple of decades long, and there’s a temptation to compartmentalize it. Though noir films work through the issues of a broken society and American (masculine) identity – issues that surely exist in infinite complexity in 2015 – could we still work within it as a relevant genre?

END_OF_DOCUMENT_TOKEN_TO_BE_REPLACED

I’ve watched this approximately 37 times since Thursday. Ain’t no shame in my game.

In my mind, two scenarios are possible:

1. An exceedingly talented editor and music supervisor made this trailer, and spun gold from pure garbage;
OR
2. This film is the Second Coming of a particular movement (existential materialist youth cinema?) and is such a high piece of art it may not be appreciated in its own time.

Is it too much to say I vote for 2? It’s because I see the indelible, soul-burning mark of Bret Easton Ellis on this movie, just from this short peek. The script is deliberately clunky. Everything looks uncomfortable. Uncanny, disgusting bodies and faces are photographed beautifully. It’s what Bret’s been dreaming of since 1983, and it appears our culture’s ready for it once more. Maybe it’s the way my generation embraces irony. Aw man, I missed you, Bret! It’s been too long since Less Than Zero and you finally got your groove back, you stupid materialist pig genius.

I recently read that an insider at South by Southwest claimed The Canyons was rejected this year because it had “a certain ugliness, a deadness to it.” PHENOMENAL! We need more of that these days. I’m not talking about the twee negative space that you encounter in indie films for thinking folk. I’m talking about glamorous, expansive, exquisitely painful, thudding, immediate emptiness.

I’m talking about Lindsay Lohan’s melting face and weakening skill for dialogue. I’m talking about her disintegrating young-old body. It’s horrifying and addictive and I want two whole hours of it. 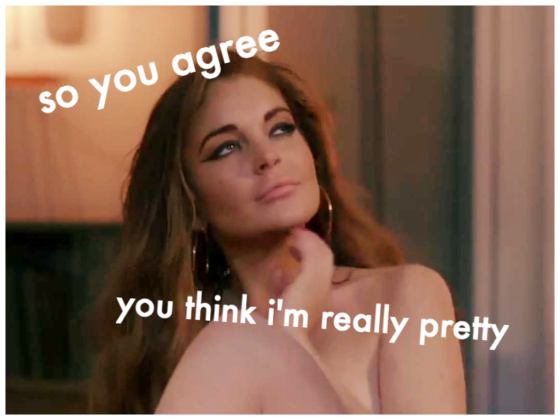 Paul Schrader (the director) said something mostly true about our fallen supernova:

Marilyn Monroe and Lohan exist in the space between actors and celebrities, people whose professional and personal performances are more or less indistinguishable. To be successful, a performer controls the balance between the professional and personal, that is, he or she makes it seem like the professional is personal. It is the lack of this control that gives performers like Monroe and Lohan their unique attraction. We sense that the actress is not performing, that we are watching life itself. We call them “troubled,” “tormented,” “train wrecks”—but we can’t turn away. We can’t stop watching. They get under our skin in a way that controlled performers can’t.

P.S. If you haven’t yet read the NY Times article about the behind-the-scenes making of this film, get thee hence. It is a thing of sublime hilarity.