I sincerely apologize for the astronomical length of time that’s passed between the VMAs and this blog post (3 days)! It’s just that Breaking Bad is also on Sundays and I had to go to work and then it was Monday, and then Tuesday…whatever. Tardy to the party.

I pointedly refuse to address Miley’s moment, because my analysis will bear no new fruits. It was terrible in so many ways. You’re all smart people, you know racism and internalized mysogyny when you see it, right? You don’t need to see the word “twerk” again in print, do you?

Instead, here’s some words on my fave moment, because I think it deserves a little sweet love from my fangirly fingers. Witness the Lady:

Color me disappointed, but not surprised, that Gaga’s performance of “Applause” was met with a lukewarm reception. People were meh on the staging because it wasn’t up to her usual standards of insane, and they were meh on the fact that she even appeared. I hate to say it, but Gaga’s zeitgeist is nearing its end, fading gently into the warm embrace of the 2000s. Perhaps the viewers expected more of a shocking swan song after last year’s provocative performance of the best thing she ever wrote.

If it wasn’t obvious before, let me state definitively for the record that I’m a big Lady Gaga fan. I admire the cultural work that she’s doing from the precarious ledge of a pop star. She’s a gifted songwriter, producer, storyteller, and performer. She knows Americana inside and out, and she actively critiques it through her art. The thing I love most about Gaga is that she TRIES, she ASPIRES. She may not always get it right, but she is unafraid to disgust people or lose favor. She believes the iconic and/or the transcendent is possible in pop, following in the great tradition of Freddie Mercury and David Bowie. I think her career would last longer if she was male. I think she knows this.

I respect that she sticks to it when she enters a new phase of her career. The new album, ARTPOP, may be terrible, and this song “Applause” may also be terrible (it is), but I’m digging the meta-ness of her new identity. This time around, Gaga Is Art. She chooses to reveal herself as a changeable construction. I think that many viewers missed the nuance of this performance, like her visual shoutout to The Birth of Venus:

Note to female pop stars and females in general – THIS IS A BODY! I’m so hungry for all the meaty feminist living flesh hanging off this bitch!

And then there was her rapid transformation – five onstage costume changes to make clear that the persona of Gaga is ever-changing, ever-derivative, like the culture she lives and thrives on. In case you didn’t get it the first time around, during the “Telephone” era, Gaga reminds us that Warhol Matters: 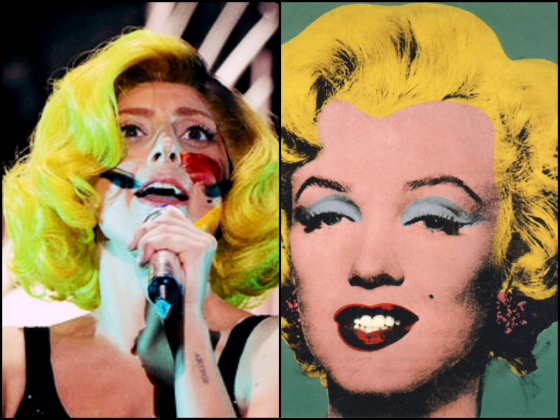 And then there’s the actual song itself. “Applause,” like I said, is really not great when you stack it up against her far superior stripped-down-dance hits like “Alejandro” or even “Judas.” The melody is super weak, as is the beat. But I found that it grew on me when I actually watched her perform it. I kind of got that the song is about the utter desperation that drives our icons, and the constant switching-up and face-clawing that becomes necessary to stay on top. It’s also about how celebrity is contingent on the fans, and that a star can’t measure their worth by box offices or concert attendance, but by how loud their audience screams and how long they clap. For now, Gaga is interested more in occupying the space of a star, and reminding all of us that we’re basically religiously beholden to a cycle of building/destroying false idols. And YOU thought it was just a show! For shame, little monsters!

As Lord Gaga’s time on earth comes to an end, I find myself saddened. Why did she have to die so soon? Who will take her place? I guess only history will tell if Stefanie Germanotta managed to achieve immortality. I really hope so. Not because I think she’s perfect, but because I badly want a female to ascend to pop legend – not selling sex, but truth and humanity like the dudes are allowed to sell. Side-eye, Madonna.

What did you think of Gaga’s performance? Toss me some brainjuice in the comments.

I have a bit of a loins itch because N*SYNC is reuniting at the MTV Video Music Awards this Sunday. Rumor has it, aka truth has it. THIS IS SO BIG! Heartwarming moment for millenials everywhere!

Man, I totally remember 2002, when Timberlake debuted without the group, and I was like “This is bullshit, the age of the solo artist is OVER and boy bands are the way of the FUTURE!” Then Justin was all narrowed-eyes and “Don’t fear me baby…it’s just Justin,” and that’s when I finally realized what ladyparts are for. You won the battle, Timberlake, and over the next ten years you would also thoroughly win the war.

But I’m always up for a little nostalgia. Welcome back, Backstreet-Boys-with-more-charisma! This I promise you: SHIT IS GONNA GET HOT.

I can’t see them performing my all-time favorite N*SYNC masterpiece, “Pop,” because of course that song has already been sexed, done, and buried. Let’s go back to 2001, a magical time when nothing hurt and the future was full of lace-up jeans and Lunchables…

I scoured the effing Internet for this clip, because Sony was hellbent on protecting their copyright. Too bad, bitches, I was on a mission. Things I’d like you to watch for: JC Chasez’s charming cha-cha at 1:39 and the “surprise guest” at the end of the video. Classic!

Everyone pumped for the VMAs? What song do you think they’re gonna sing? Does Chris Kirkpatrick still look like a rock-alt hobbit? The anticipation, y’all!